Settle in…it’s a long one! I was fortunate to have a pretty straightforward pregnancy and had always considered completing a hypnobirthing course. As a midwife, I have supported several women using hypnobirthing techniques for their own labours and had seen how effective it could be. I’d been told from a couple of extra scans that I was cooking a pretty good sized baby so naively thought I’d end up spontaneously labouring before my ‘due date’, so when that came and went I felt a little frustrated.

During our classes with Shelley, we talked about my mindset regarding an induction and how I could avoid getting fixated on a booked date to help me labour spontaneously. I felt well informed about what an induction of labour involved, it was something I was keen to avoid however when I was still pregnant at 12 days ‘overdue’ we used the BRAIN tool to weigh up our options and decided to accept an induction. I was fed up and despite nearly 3 weeks of cramping on and off and signs that things might be happening, I was still very much pregnant. I chose to birth in the hospital where I work, surrounded by colleagues that are like a second family and who I trusted wholeheartedly. Combining this with everything Shelley taught us during our hypnobirthing course I went into my induction feeling relaxed and prepared for any eventuality but also so excited to finally meet our little girl.

Although birthing on labour ward was our ‘plan B’ we settled into our room and instantly made it our own, setting up a portable diffuser with aromatherapy scents, listening to some relaxing music and creating our snack/hydration station. I had chosen to accept membrane sweeps from my due date (I had 3 in total) so was already aware my cervix was 2cm dilated and so was hopeful I could skip a couple of the induction steps and go straight to having my waters broken. After a few checks and some observations I had my waters broken at 3pm when I was 2cm. As it was my first baby, the recommendation from the medical team was to start an Oxytocin hormone drip straight away, however I was keen to try and see if I could get things moving on my own so we opted to delay this by a couple of hours.

I put in my noise cancelling headphones to block out any background noise from the ward outside and focused on my music and birth scripts. I used the pebble Shelley gave us during our class as an anchor to help focus my mind and take me to my happy place to try and get the oxytocin flowing. I also got bouncing on the birthing ball and went off for a long walk around the hospital, trying to encourage contractions to start. After a couple of hours and having only had 3 very mild contractions, we decided it was time to get things moving with the help of the oxytocin drip. I was connected to a heart rate monitor so my baby’s heart rate could be monitored throughout labour but my colleagues had gone above and beyond to read our birth plan beforehand and sourced a wireless monitor so I could stay upright and active. The bed was folded up in a way so that I could move around freely but also use it for support whilst remaining upright, the lights were all dimmed and medical equipment was turned away so I couldn’t focus on it and any alarms were turned off so I wasn’t distracted by unnecessary noise. Within 30 minutes of starting the hormone drip, things began to intensify quite rapidly and my contractions were already happening 3 times in 10 minutes.

I attached my tens machine and fairly soon after that commenced on the gas and air…in hindsight I probably started using the tens machine a bit too late but I was holding out for as long as possible, expecting a long drawn out labour throughout the night. 2 hours passed by so quickly, I was beginning to find contractions very intense with minimal break in between so the hormone drip was reduced and I was offered an examination as I was considering further pain relief. By 8pm I was 4cm dilated and although was happy I had made good progress, I still thought I was in for a long night ahead and felt I needed some relief from what felt like constant contractions so chose to have an epidural. Although it didn’t really work fully, for me it was perfect as it reduced the intensity of what I was feeling and enabled me to get my focus back and use the breathing techniques we’d been practicing.

I wasn’t able to be fully mobile but I still had movement in my legs so I could remain upright and change positions. Another couple of hours passed, which seemed to fly by but by now the baby’s heart rate was starting to show some signs of distress. The monitoring was streamed live into the office so the doctors could monitor it remotely without needing to keep coming in and out of the room. I was offered another examination as they wanted to see if I was making progress, if not they were planning on offering me a caesarean (I found this out in hindsight) but thankfully I was 9cm and progressing rapidly…most likely why baby’s heart rate had started dropping.

However shortly after this the doctors started to get more concerned about the heart rate tracing as it was continuing to show that my baby might be getting distressed with every contraction. Another examination confirmed I was fully dilated and ready to start pushing. As her head was still very high in my pelvis, there was quite a significant chance I would require some assistance and even possibly a caesarean if her heart rate continued to be worrying (again I was told this afterwards when the doctors came round later for a debrief chat so I could focus on what I needed too and not worry about any other potential outcomes that I couldn’t control).

Thankfully with pushing it slightly improved and I pushed for just under an hour before the doctors recommended giving me some assistance with forceps. Thankfully I’d pushed enough that I’d moved her down in my pelvis and didn’t need to go to theatre. A few more pushes later and with some assistance from the doctors my beautiful daughter was gently lifted up straight onto my chest as she screamed life into her lungs. We had 5 minutes of delayed cord clamping while skin to skin and then I got to cut her cord. I had an episiotomy so while this was being stitched she latched to the breast for her first feed. We had hours of skin to skin, had the tea and toast I’ve heard women rave about and my little lady was checked and weighed, a very respectable 8lb 1oz, not the huge baby they predicted but also a pretty good size for me.

On paper my birth was everything I wanted to avoid, plan b and maybe even plan c but I still reminisce and feel positive about everything. I was empowered to make choices that were right for me. I felt respected and fully trusted my support team around me. I started writing this when my daughter was only a few weeks old but as I sit here with a healthy 10 week old baby now and re-read it through again I can only smile thinking back to the best day of my life. 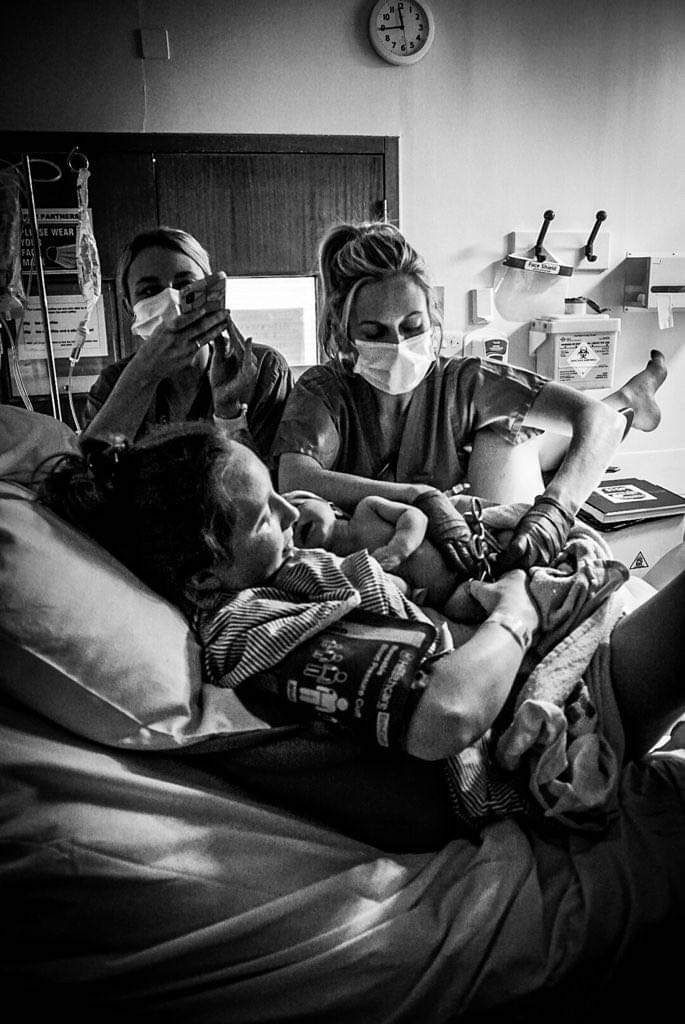