We made it all the way to 40 weeks!!! It was the night before my 40 week appointment and I felt a huge movement in the night that woke me and took my breathe away. I’d felt something similar with my first birth the night I’d had my ECV to turn the baby head down so immediately I thought the baby had flipped themselves breech! I told the midwife the next day and she check and checked and checked again and was sure the baby was in fact still head down! I was however measuring big so would be going for a growth scan… as I was so late on in the pregnancy she said it would be be an urgent scan and I was booked in for Friday- it was only Monday! I figured the baby would be here by then and it would be cancelled but… nope! Friday came and as soon as the sonographer put the scanner to my tummy she said ‘did you know your baby is breech!!’ 🤦🏻‍♀️ ‘oh and they can move around a lot as they are now transverse’ We were told we round need to wait and see a consultant as this could mean if I went into labour… Especially if my waters went first (which they had both other births!) there was a chance I could deliver the cord first.

I knew what the consultant would say but I still broke down at the words.. he wanted to admit me now and perform a c-section tonight or tomorrow. I think my reaction took him by surprise and I pretty much immediately asked for an alternative! The baby had a predicted weight of 9lb 6oz my biggest by far if that were to be true! After lots of chats with other consultants he returned and said if I stayed in hospital until I delivered they could rescan me in the morning!. If baby is head down then they could induce labour with the possibility of breaking my waters to hold baby as low as possible. Sold! They even let me go home to collect my bags and fill in my two girls that their baby was on the way! After a horrendous night on the ward listening to constant baby monitoring and mums in early labour they arrived to talk me through my c-section?! My lovely husband was straight in to ask for the rescan! They did it straight away and found baby head down all ready to go! Hallelujah! I had a pessary put in about midday and bounced… walked… ate and rested hoping for any signs of labour but by 9pm Oliver had to leave and I hadn’t felt even a twinge!

So he went home to the girls and sent my mum home for a decent nights sleep as I was sure we wouldn’t be meeting our baby anytime soon! After he left I watched trashy tv… ate soooo much chocolate and went to bed around midnight. At just after 1 I woke and get period type pains and decided to head for a wee and let the midwife know I was awake so she could do my monitoring etc. As I walked out she was on the desk and I said I thought things were starting and could I take something so I could go back to sleep ready? She said I could have codine to take the edge off and would have it ready for me after I’d used the bathroom.. on the way back from the bathroom the pain definitely intensified and was noticeably surging but still mild… I got to my bay and the midwife arrived to monitor the baby… I could hardly get on the bed so she helped me up and strapped the monitors. I was so uncomfortable on my back I asked her to help me move and as I did the baby moved so low my belly looked like a flat tray. The midwife said she would be back in 20 mins and off she went! A few minutes passed and I was so uncomfortable I started to sweat I tried to move my move my legs more over to the side and as I did I felt my first proper contraction… a strong one! The next one came quickly and I though to myself ‘I better start my breathing techniques’ the next one arrived and was so strong I almost felt a pushing sensation and… my waters broke!

I was still in my dressing gown and began ripping it off but it was held down by the monitors… the contractions were back to back and I couldn’t stop myself from pushing. I couldn’t reach a call button or move even an inch so I ended up calling out… ‘fuck… I’m pushing!’ Help!! I’m pushing I can’t stop myself… while almost laughing at the ridiculousness of the situation! The poor ladies on the other side of the curtains trying to sleep! The midwife returned and said she needed to check I was actually 10cm- 🙄 I was and she informed me there was no space on labour ward so I was going to have to give birth there in that bay with my audience!!! A midwife arrived from the ward and I asked her to call my husband which she did… she was super calm on the phone and basically Just said things were starting… I was thinking… it’s almost done actually! She said a room was free over the corridor and could I make it… I said yes but does she want me to walk there?! She got a wheelchair and they helped me off the bed where I ripped of the dressing down that had been stuck to me! I looked at the wheelchair and there was I No way I was sitting on that… so I got on it backwards on my knees and I grabbed my phone and text Oliver one word… ‘Hurry!’ They pushed me into the other room and switched on all the lights… to Which I said can it be dark please… and I got off the wheelchair and walked towards the bed.. then the midwife said there was now a room free in labour ward did I want to go there?

So back on the wheelchair I went phone in hand… pushing the doors open as I went as the midwife pushed the armrests behind me! I was quite the sight! We reached the room which was already dark and first things first I started my labour playlist! Phew! It took me forever to get on the bed in between contractions as the baby was so low I could hardly lift my legs but I wanted to rest on the back of the bed on my knees… as this had been how I had had my second and was comfortable… I got there in the end but the midwife couldn’t get the monitor on the baby so I was off the bed again… it was in my notes that I didn’t want any monitoring unless necessary so I just let her get on with it while I just concentrated on breathing and waited for Oliver! I think all the faffing of room changed and wheelchair rides slower everything down and oliver arrived at 2:15… 45 mins after that first contraction… Once he was there I relaxed a lot but I was still being asked to moved around a lot for the monitoring… eventually they asked me if I could just lay on my back… which I really didn’t want to do but the fact I was being asked made me think it was necessary and within seconds the monitors were all sorted and we could hear the baby’s heart beating away.. all good. When Oliver arrived babies head was already crowning and then things slowed and we weren’t getting further… another midwife entered the room and said to me something like is that all you’ve got? Could you do more…? Oliver said he expected me to open my eyes and give her a few of my thoughts but instead I said… yep I can do more… it was like an old dance teacher telling me I wasn’t doing my best… I’ll show her! And that’s exactly what I did… I trusted her for some reasons she pushed me… she said out your chin down and I did and I pushed and breathed and felt like she gave me permission to go for it! And as soon as I did… my baby was born! All 10lb of him! Our beautiful baby boy Alfred Ronald Kenward! Born at 3:33 at 40 +6! After 2 hours of labour (And not even a tear?! I mean wtf?!) 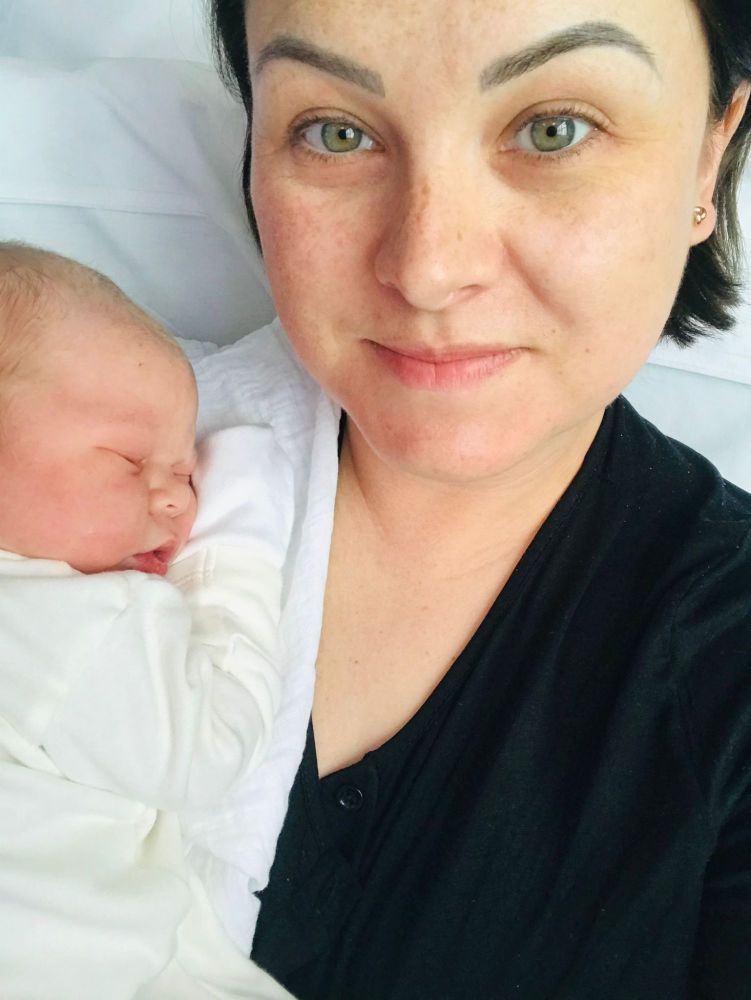